Blood return from the brain

The dural enfoldments of the falx and tent act as the sites for most of the brain’s venous return. Formed between the two dural layers, simple tube-like structures called sinuses form a network around the brain that drain into main collecting sinuses in the falx and tent. Unlike veins, these structures do not have a muscle layer and nor do they have valves.


The health of the dura mater will have a profound effect on the ability of blood to return smoothly through the sinuses and back to the heart. Dural tension, adhesion and drag can exert a strong effect on the flow through the sinuses and can result in a back-pressure in the head. Craniosacral therapy can relieve these effects, thus freeing up the pathways to the heart by relating to key structures within this system, in particular the sagittal sinus, the transverse sinus, the straight sinus and the cavernous sinus along with the occipitomastoid suture.

Relating to the venous sinuses


In order to get to know the sinus system better and to appreciate the critical nature of certain structures in the healthy flow back to the heart, it’s useful to practice moving through the system from top to bottom so that you can feel the affects of the system releasing in sections.


Working from front to back in the head makes most sense as the blood return is in that direction. Start by contacting the superior sagittal sinus under the frontal bone by lining up your finger tips along the length of the metopic line. Stay with this for a few minutes and you should notice a softening in the falx and therefore the sinus. Continue this on along the whole of the sagittal suture.


Then bring your finger tips along the length of the transverse sinuses both left and right at the back of the head, make sure you have your small finger tips touching at the confluence. This should produce a strong affect of opening and flowing down into the cranial base.


Check the alignment of the occipitomastoid suture by contacting the occiput with one hand and the temporal with another. You should be able to feel the craniosacral motion of each of the bones around the suture.


Then bring your finger tips to the back of the neck by lining up your finger tips along the length of the spine in the gully formed by the erector spinae muscles and the spinous processes. From here you should be able to get a sense of the carotid sheath carrying the jugular vein.


Finally bring a hand front and back of the thoracic inlet in order to create a spaciousness in the tissues around the jugular veins. Take your time with this procedure. It is meant as a learning process so you can track the sinuses and veins and monitor the change in the tissues and the blood movement.


In a clinic situation, you are encouraged to work within the parameters of the inherent treatment plan. So avoiding using a technique. The body will let you know if there are issues with the venous return if you are familiar with relating to these structures. So it becomes more about knowing these relationships are revealing themselves during the treatment process; sometimes, when there is particularly strong pattern emerging, you may need to relate to the tissues with specific hand holds.

Orient to differences in the left and right jugular veins

'It took me a while to really appreciate the venous sinuses. The protocol I was taught was overly complex with lots of difficult handholds – it put me off for years to be honest. Last year I was teaching about the blood flow from the head and I came across a wonderful image in Theime of the jugular veins – the image below (Venous sinuses posterior view) is my attempt to generate a similar view. The image gave me another way into the venous sinuses.

By focusing on differences in flow between the left and right jugular veins, and only really orienting to the sinuses shown above, I found I have much clearer experiences of blood leaving the skull. It is a good orientation and really seems to help people drop into a deep space. I hope it works for you.' Steve Haines [1]

CSF also leaves the skull via the ethmoid

CSF outflow from the skull also occurs via the sleeves of dura around the cranial nerves. The CSF drains into the lymphatics of the mucous membranes of the air sinuses. This route of CSF leaving the skull is greatest via the ethmoid.[2]

Poor venous sinus drainage has been linked to MS 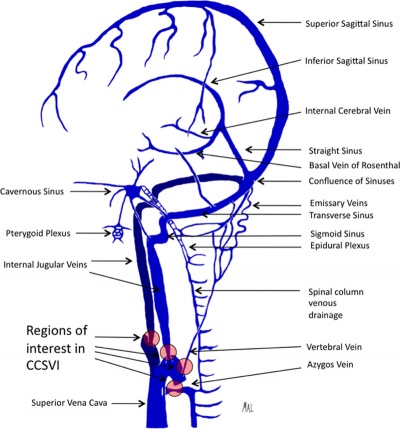