Side Position: Ethmoid to coccyx

This is wonderful way to orient to expressions of health along the midline.

It is particularly good for the midline extending between the coccyx and ethmoid, called the primal midline or anterior midline. This midline passes though the vertebral bodies, discs and cranial base ending in the body of the sphenoid. It follows the path of the embryological notochord - a tube of cells along the long axis of the embryo. The notochord appears and then disappears in the embryo. As the embryo as it shapes itself, the notochord it is an early organising centre for the formation of somites and development of structures. 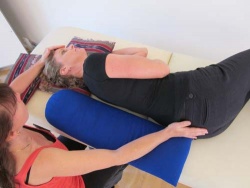 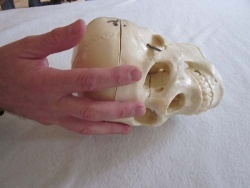 Side Position: Occiput and sacrum

This is useful for feeling the inferior and superior waterbeds: the collections of cerebrospinal fluid anterior to the occiput in the cisterns around the cerebellum and brain stem, and the cerebrospinal fluid in the lumbar enlargement and sacral canal at the end of the dural sac. The hands can be vertically aligned or horizontal as shown below - it depends on practitioner comfort. Use lots of pillows to support your elbows and wrists and get the client to move as close as they can to the opposite side of the table. 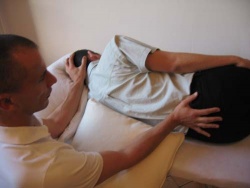 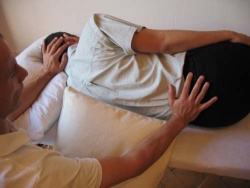 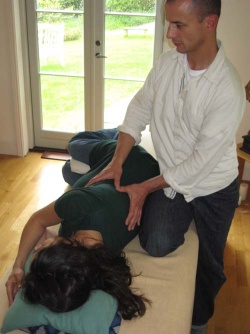 Side Position: Craniopelvic resonance via temporal and innominate bones 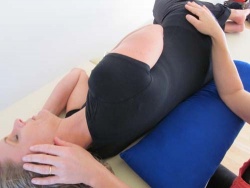 Side Position: Holding the head

Holding the frontal bone and occiput in side position is a great way of tuning into the falx. 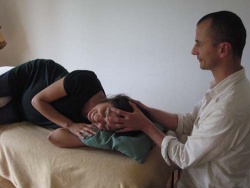 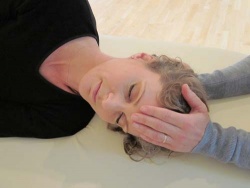 When to use side positions

Side position is really useful for acute back pain when a client cannot lie on their back, later stages of pregnancy, and integration at the end of a session.