Make sure your elbows are supported. The finger pads reach down to the lower margin of the paired maxillary bones. The heels of the hands can rest lightly on the brow. The position of the thumbs can very as shown above, but it can be nice to let them rest over the ethmoid via the glabella. 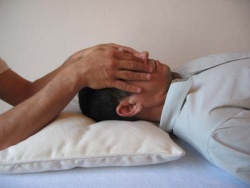 The face is a remarkably unexpected structure dominated by the maxillae bones which act as the mainframe of the face. Most other bones of the face either joint with it or are affected by its form and movement. To understand the face you must appreciate the motion dynamics of the maxillae.


Typically the maxillae externally and internally rotate around their common suture - the intermaxillary suture. The maxillae are commonly said to hang off the frontal bones and the frontomaxillary suture acts as a pivot for the craniosacral motion of the bones.


The maxillae are the largest bones of the face and all other bones are powerfully influenced by them.


Dental issues can created havoc in their health expressions. The maxillae are not only most of the face structure but they are also part of the lower orbit of the eyes, part of the bridge of the nose, the first part of the airway creating the nasopharynx and the sinuses and attachments for the conchae but they also form the upper jaw and the roof of the mouth. That’s a lot of different functions for two bones in an area where there is a lot of movement from breathing, speaking and eating along with visual action. Understandably the maxillae can become affected and restrictions commonly occur that leads to shape in their craniosacral motion and a lowering of potency. Typically they can express compression, sidebending and torsion patterns.

The maxilla flare out on inhalation and widen side to side. 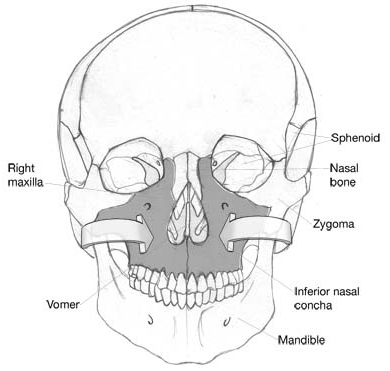