Finger pads rest over the eyebrows. Make sure your elbows are well supported. 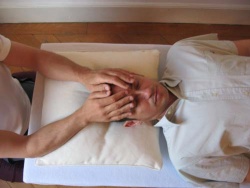 Frontal bone is in two parts at birth

The frontal bone is developed from two centers above the orbits which radiate upwards into the forehead and backwards over the orbit. At birth, the bone consists of two pieces which become united along the centre by a suture called the metopic suture. This becomes obliterated in most people after a few years. In some cases though it persists. Castilho et al (2006) discuss figures of between 2 and 10 per cent for metopism and around 30 per cent for incomplete closure; they indicate normal closure is any time between 1 year and 10 years[1]. In any case, the primary respiratory motion of the frontal bone often exhibits motion around this suture line which produces a combination of a single midline bone and a paired bone motion, that is, rolling back and forth, and widening and narrowing.